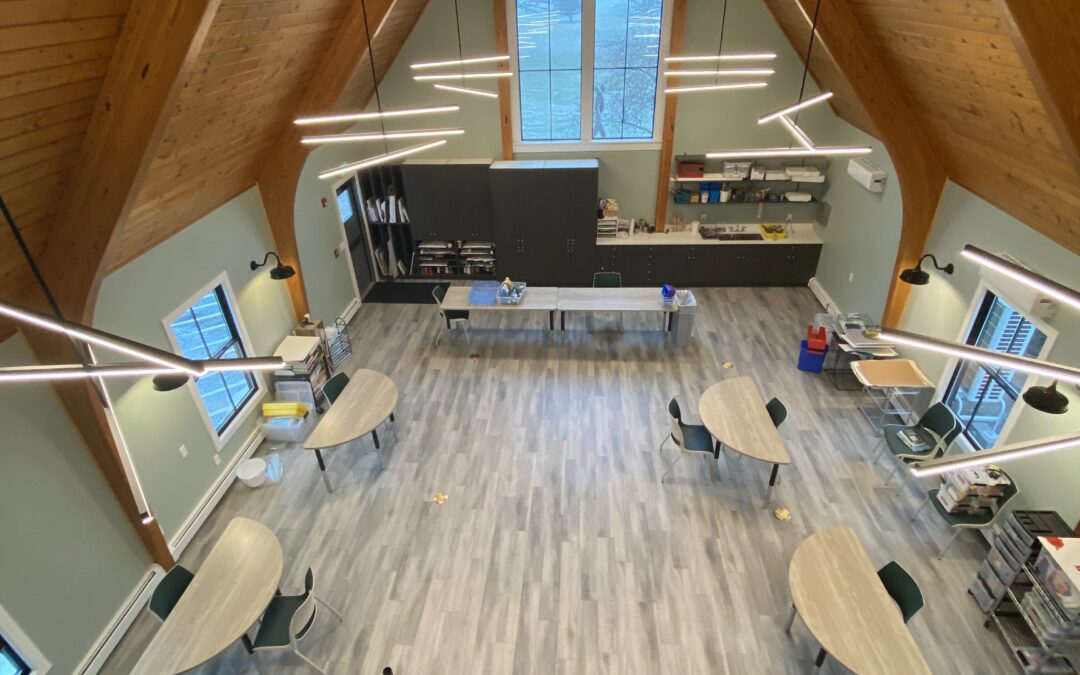 Saratoga Springs, NY – December 28, 2020 – The Sarah B. Foulke Charitable Fund awarded a $200,000 grant to The Charlton School, a therapeutic learning community located in Burnt Hills. This donation supports a 20-year long-term capital campaign planned to transform the school’s physical campus, one building at a time. The Sarah B. Foulke Charitable Fund donation specifically helped to finance renovations to a historic chapel that has served as a therapeutic arts space since 2014. The renovation project, which began in June 2020, was completed in early December by Schrader & Company Construction Services. The updated arts center will open its doors and dedicate the new space in honor of Sarah B. Foulke, at a ribbon cutting ceremony on Friday, January 15 at 11am. There will also be an option to view the ceremony on Facebook @CharltonSchool.

Anthony J. Izzo, speaking on behalf of Suzan Nolan and Lyn Murphy, two other advisors to the Sarah B. Foulke Charitable Fund, which is administered through The Community Foundation for the Greater Capital Region, explained the impetus for the gift. “Sarah Blackwell Foulke, a long-time Saratoga Springs resident and an attorney who practiced in Saratoga County, was a kind, giving, compassionate, and courageous woman who loved the arts and her community. She felt women deserved better opportunities in this world than they have.”

“Sarah grew up in a challenging environment, both mentally and emotionally,” Suzan Nolan explained further. “Without access to the kind of support that Charlton School provides, though, Sarah had to fight her battles alone. Her struggle instilled an understanding that no one is perfect; Sarah often said that ‘we are all messy rooms sometimes.’ On her own, Sarah learned to use art, music, and writing as a way to process and genuinely express her feelings. These practices allowed Sarah to clear her head, work around insoluble problems, and succeed in life – first academically, then professionally, and always as an empathetic and generous friend.”

After touring the school and reviewing its mission, the Sarah B. Foulke Fund advisors decided that The Charlton School would be a good fit with Sarah’s interests in supporting the arts and opportunities that empower young women. Anthony Izzo adds, “We knew that naming the Arts Center in Sarah’s honor would create a long-lasting legacy to her spirit and passion for helping students of the school achieve great things and become their best selves. In this way, through The Charlton School, Sarah’s name will always be associated with enriching young students’ lives.”

Executive Director Capo added, “The Sarah B. Foulke Arts Center is the first in a series of campus buildings to be renovated to better accommodate the needs of our growing student population and to update our 75+ year-old campus facilities. We believe that every student deserves an environment and space that is reflective of respect and care, and one that will help facilitate their emotional, mental and physical health. We will be appealing to the community for support of our efforts to rebuild and rehabilitate our campus facilities now and throughout the next ten years of our capital campaign called ‘The Next Chapter’. The ‘Next Chapter’ will continue with the establishment of new student campus housing and the building of modern dormitory facilities. We are extremely grateful to the Sarah B. Foulke Charitable Fund for their generous contribution and for being the catalyst in getting us started toward the achievement of our ongoing campaign fundraising goals.”